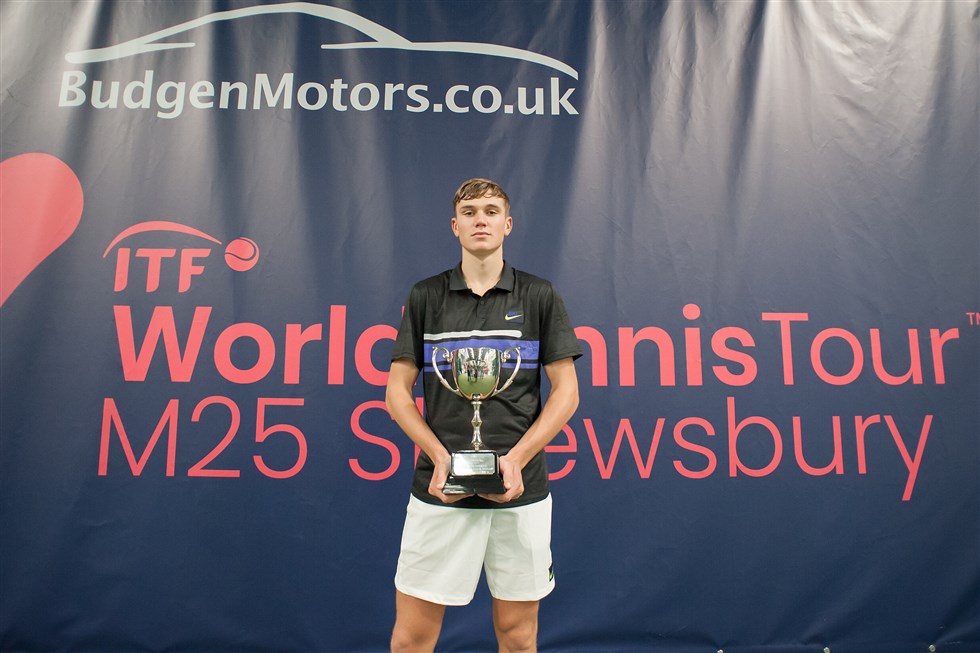 Less than two years after becoming the youngest winner of a GB men’s Pro-Series title here at The Shrewsbury Club, Jack Draper will tomorrow walk out at Wimbledon to play defending champion Novak Djokovic on Centre Court.

Rising British star Draper, 19, is preparing to face the world number one in an intriguing first round match after receiving a wild card to make his Wimbledon main-draw debut. Draper's climb up the world rankings - he’s currently a career high 250 - will not surprise Shropshire tennis fans who watched him play at The Shrewsbury Club in September 2019.

A host of quality performances on our indoor courts saw Draper, from Surrey, crowned winner of the Budgen Motors ITF World Tour M25 Shrewsbury tournament. Draper, who was aged 17 at the time, was top seed for the Shrewsbury event and eventually beat Italian Julian Ocleppo in straight sets in the final. It meant he became the first British player to win a Pro-Series men’s tournament in Shrewsbury since Dan Evans, who is now ranked 26 in the world, six years earlier.

Dave Courteen, our managing director, said: “It demonstrates the quality of the events we have at Shrewsbury in that Jack Draper played the last time we staged a tournament and he's now getting ready to play Novak Djokovic in the first round at Wimbledon. It doesn’t get better than that.

"He’s gone from playing Centre Court Shrewsbury to Centre Court Wimbledon in less than two years, a short period of time when you think that tennis stopped at one stage because of the pandemic. We saw Jack’s potential when he played at Shrewsbury. He’s an excellent prospect and this will be a wonderful experience for him."

He added: “Jack impressed on and off court during his week in Shrewsbury. He’s a big hitter, moves around the court nicely and had a really determined attitude that clearly marked him out as someone determined to be successful. Off court, he was quietly spoken, an accommodating lad, who fitted in with everybody, chatted with members and was really happy to be part of what was going on at the Club.

“We hope he does well against Novak Djokovic and will be keeping a close eye on the match. Jack’s not the first player that’s played at The Shrewsbury Club to end up shortly afterwards on Centre Court as Marcus Willis played against Roger Federer at Wimbledon in 2016."

Draper, who reached the boys’ singles final at Wimbledon in 2018, underlined his potential earlier this month by progressing to the quarter finals of the cinch Championships at London’s Queen’s Club, beating two players ranked in the world’s top 40 in the process.

Draper will be competing at Wimbledon this year alongside a number of other British and world tennis stars to have previously taken part in tournaments at The Shrewsbury Club. We hope to get back to staging world class tennis events at the Club as soon as the travel ban and quaratine rules are lifted.