The Shrewsbury Club is reopening on July 25th Read more

“It’s the second year we’ve made the final and we were defending champions,” said Luke. “Woore had a couple of very good wins to reach the final and they brought a tremendous number of people with them to support them on the night. It was an amazing atmosphere as a lot of people also turned out from our club to support us, so thank you to everyone who came along."

“It was a great evening and I can’t thank everyone enough who played throughout the whole competition. I couldn’t have asked for any more and it was a really good effort from everybody. Thanks to Aimee Cooper, Tomas Cores Birch, Sue Dunn and Jon Gidney who featured in the team in the earlier rounds."

“It’s been an excellent year for the club because we also managed to win the Autumn Mixed Doubles League. That’s the first time we’ve managed to do that and we achieved it without losing a fixture all season.”

Nigel Stonier, the chairman of Woore Tennis Club, added: "As this was our second year of playing competitive tennis in the Shropshire Leagues, Woore Tennis Club entered the Mackenzie Shield for the first time to give our players the opportunity to play against higher standard players in the higher divisions. Being seeded 10 was a surprise as we were only playing this year in Division 5N. We were even more surprised that after four matches we were through to the final."

"Members of the club took the opportunity to come and support the club with over 20 taking the opportunity to visit The Shrewsbury Club - and their support helped make the occasion a special one. The team of Kyle Fellows, Shelley Dickson, Graeme Jones and Sue Titley enjoyed the final, and after a valiant effort were beaten by a better team who were undefeated throughout the season. We are now looking forward to having another go next season.”

Simon Jones, the Tennis Shropshire chair, said: “It was great to see Woore Tennis Club reach the Mackenzie Shield final for the first time and to have so much support with them - with The Shrewsbury Club team again showing what a strong side they are to retain the trophy." 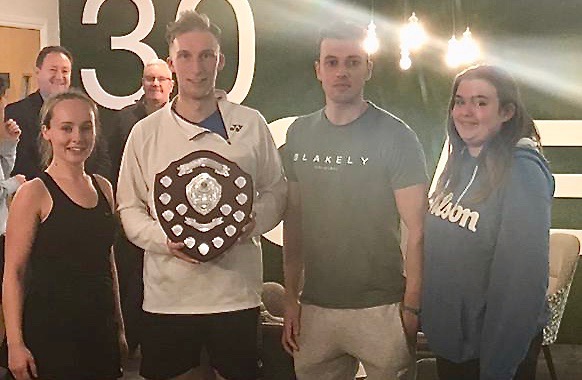