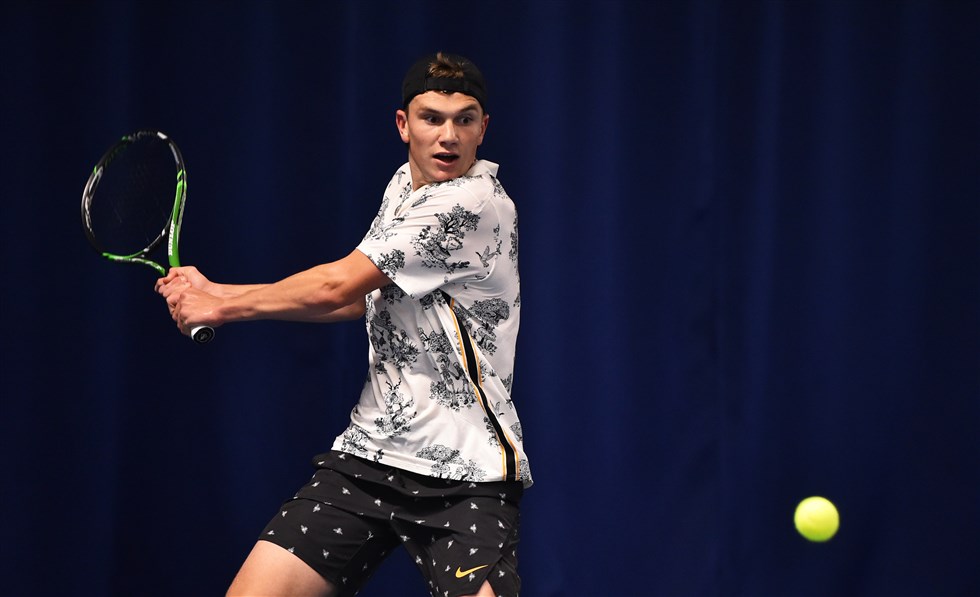 Pictured: Jack Draper in action. Picture courtesy of Getty Images for the LTA.

An exciting line up of rising British tennis stars is set to compete in next week’s Budgen Motors ITF World Tour M25 Shrewsbury tournament at the Club.

Jack Draper, Aidan McHugh and Anton Matusevich are among the promising Brits to have entered the event, which is part of the LTA GB Pro-Series.

Draper, 17, currently 337 in the world rankings, reached the boys’ singles final at Wimbledon in 2018, while McHugh, 19, and Matusevich, 18, are also making big strides in their progression from the junior to the professional game.

Qualifying for the $25,000 International Tennis Federation tournament starts next Monday, with the main draw matches beginning on Tuesday. The singles final will be played on Saturday, September 28.

Admission is free to spectators to enjoy the action on our indoor courts throughout the event. Viewing will be from tehe balcony until Thursday, which is quarter-final day when the matches wcan be viewed from courtside seating.

Richard Joyner, the tournament director for the LTA said: “There’s a lot of very good players on the acceptance list and we are particularly excited to have a strong line up of young British players competing as part of their climb up the rankings.

“It’s fantastic that Jack Draper is coming to Shrewsbury as he’s an exciting talent and great to watch.

"He came to prominence when he made the final of the junior event at Wimbledon in July 2018 and it’s impressive what he’s done since.

“He won his first professional title at an event in Nottingham this time last year and went on to win back-to-back titles having only gained his first pro ranking a few weeks earlier.

"Aidan McHugh is mentored by Andy Murray and is in his first year out of juniors, while Anton Matusevich made the quarter-finals at the junior event at Wimbledon this summer.”

Players from across Europe have entered the event - with The Shrewsbury Club enjoying an impressive reputation on the international tennis circuit.

“The week promises to be another great showcase for tennis,” added Joyner. "In addition to the players playing for world ranking points and prize money, it's another tremendous opportunity to inspire local youngsters and people of all ages to get involved with the sport, which is a key part of the LTA’s Tennis Opened Up strategy.

"The Shrewsbury Club do a great job hosting these events. Their welcome to players and tournament officials is always first class’’.

"The local pride in the club, and the town itself, is clear for all to see, and I know this and the great facilities on offer make Shrewsbury a popular venue with the players.

"This level of event is not only an important stepping stone in the development of young players at international level, but also a platform for more established players who are looking to improve their ATP world ranking.

“Spectators will once more be able to enjoy some high-quality tennis and closely fought matches.”

Dave Courteen, the managing director of The Shrewsbury Club, is looking forward to another exciting week and hopes local tennis fans will continue to support the tournament in impressive numbers.

“We always love hosting these tournaments,” he said. “There’s a fantastic atmosphere around the club and it’s an opportunity for local people to watch world class tennis close to home.

“Many players who have graced our courts over the years have gone on to become big stars. That’s the beauty of these events as they serve as a chance to pick out the tennis stars of the future.”