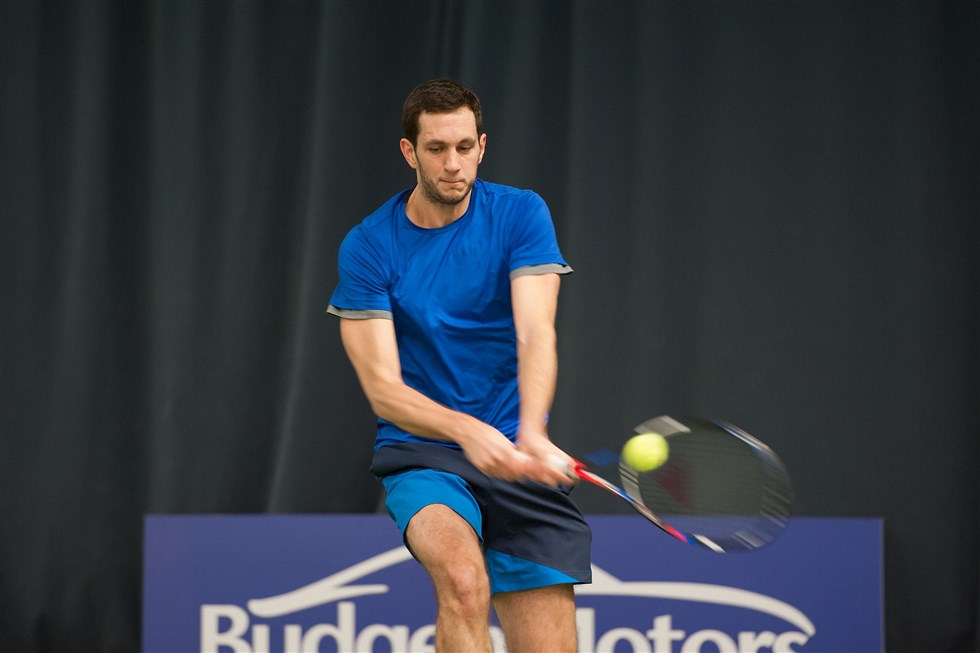 James Ward, a member of Great Britain’s winning Davis Cup team in 2015, is heading to Shropshire to compete in next month’s UK Pro League Finals Week here at The Shrewsbury Club

Ward is one of the players to receive a wild card to compete in the prestigious event to be held on our indoor courts between November 8-14.

Wild cards have also been given to Great Britain Fed Cup star Katie Swan, along with Jay Clarke, who enjoyed an excellent run in the mixed doubles at Wimbledon in 2018, and Samantha Murray Sharan, currently eighth in the British women’s rankings.

One more wild card will be awarded in both the men's and women's draws to complete the line-up at an event featuring rising stars of British tennis along with more established players.

The six players given wild cards by River Media Partners, the tournament organisers, will join the top nine men and top nine women to have qualified for finals week after taking part in tournaments around the country this year.

The 24 players in action in Shrewsbury will be competing for £115,000 in prize money, in front of the BT Sport cameras, initially battling it out in a round robin group format.

The winners of the men’s and women’s competitions will each receive £15,000.

Dave Courteen, The Shrewsbury Club’s managing director, said: “We are really encouraged by the early ticket sales and now we are announcing the players that will be receiving wild cards, we expect to see an ever greater demand.

"The Berrys/Morris Group VIP lunch on finals day, Sunday, November 14, is already sold out, but tickets are still available for people to come along and watch the final, as well as matches on the other days throughout the week.

“Afternoon matches will start at 1pm and evening matches at 7pm to allow people to also come and watch after work and school.

"We advise booking your seats as soon as possible as this is a great opportunity for spectators to watch brilliant live tennis in Shrewsbury from court-side stands.

“The players given wild cards are all exciting players to watch and regularly play at Wimbledon.

"We are really looking forward to welcoming them and all the players to have qualified to The Shrewsbury Club for UK Pro League Finals Week. It will be a fantastic event."

Of the players handed wild cards, James Ward, 34, achieved a career high world ranking of 89 in 2015, the year he progressed to the third round of the men’s singles at Wimbledon and was also part of the first Great Britain team to win the Davis Cup for 79 years, playing in the victories over France and USA in the earlier rounds.

Jay Clarke, 23, currently sixth in the British men’s rankings, reached the semi-finals of the mixed doubles, partnering Harriet Dart, at Wimbledon in 2018. The following year he advanced to the second round of the men’s singles at Wimbledon when he played Roger Federer.

Katie Swan, 22, made her debut for the Great Britain Fed Cup team at the age of 16.

She won through three qualifying rounds to reach the first round of the ladies’ singles at Wimbledon this year when she was beaten by American player Madison Keys. She had previously progressed to the second round at SW19 in 2018.

Samantha Murray Sharan, 34, who has a career high world singles ranking of 165, is currently ranked eighth in Great Britain. She featured in the ladies’ singles main draw at Wimbledon for the third time in her career earlier this year.

Admission prices for the UK Pro League from Monday to Friday is £5 each day. It's £7.50 for the semi-finals on Saturday and finals on Sunday, with all tickets including a 20-page tournament programme.

A weekly pass providing entry to all matches throughout the week is also available for £25.

A busy schedule of hospitality events has also been arranged with guests to be entertained in a marquee.

To buy tickets and for more information about the hospitality events, visit https://worldtennistourshrewsbury.com/tickets-and-events/