Shropshire tennis ace Rob Rue, a member here at The Shrewsbury Club, insists he’s “absolutely thrilled” to have received his first international call up from Wales.

Rob, who has born in Neath and has lived in Shrewsbury for the last 30 years, has been selected to represent Wales in the men’s over-65 age group at the Four Nations Championships at Bolton Arena in May.

He will be part of a Wales team competing against England, Ireland and Scotland. Rob, who has played regularly for Shropshire at various age groups since moving to the county, is excited at having the opportunity to represent his country for the first time. He caught the eye of the national team selectors for his consistent performances on the International Tennis Federation’s over-65s circuit.

“This is the first year I’ve been selected,” said Rob, one of four players named in the Wales over-65 men’s team. "I was hopeful two years ago, but didn’t get the call. I play a lot on the circuit and took part in about 16 tournaments last year. People know I’m Welsh, so the people involved in Welsh tennis got to know that I was eligible to play for Wales.

“I heard before Christmas that I was under consideration with a lot of other players. Then I was actually playing a tournament in Glasgow in January when I got a call to tell me the good news that I had been selected.”

He’s now looking forward to the tournament, which will take place in Bolton between May 8-10, adding that it will be a proud moment.

“I’m just thrilled, absolutely thrilled,” said Rob, a retired civil servant. "It’s an honour to represent your country. I don’t think I ever thought that it would happen, although it was always an ambition even while I was playing when I was working. I remember saying to a colleague when I was asked if I had any ambitions that I would love to play tennis for my country. The call has now come and I’m just thrilled and honoured.”

Rob started to play tennis regularly during his 30s when he joined a club while he was living in Hertfordshire. He initially played his tennis at Shrewsbury Lawn Tennis Club after moving to Shropshire in 1990 and, for just over the last 10 years, has been a member at The Shrewsbury Club. He plays here on the indoor courts up to four times each week. He was first selected to represent Shropshire at over-35 level and is now a regular for the county over-65s men’s team.

He has just taken the decision to stand down as captain after six years in the role, four years with the over-60s and the last two years with the over-65s. Rob is currently nationally ranked tenth in the LTA rankings in his age group after being as high as eight last year.

He recently took part in the Scottish Open in Glasgow where he and partner Barrie Gilbert, who plays for Surrey, were beaten finalists in the doubles. “I play mainly ITF tournaments, a couple of LTA tournaments as well,” said Rob. “It went pretty well last year. I must have done quite well to have been selected by Wales. I won one singles tournament on grass at Felixstowe, got to the final of another on clay at Leicester and reached a semi-final at Bolton.

“I also won two doubles tournaments on grass at Frinton and Tunbridge Wells.” His wife Jane, also a keen tennis player, often joins Rob on his tennis travels: “I’ve got a calendar full of tournaments right through the whole year,” he added.

Pictured: Rob Rue, a regular member of the Shropshire county side pictured here at The Shrewsbury Club, is thrilled to have been selected to play tennis for Wales in May. 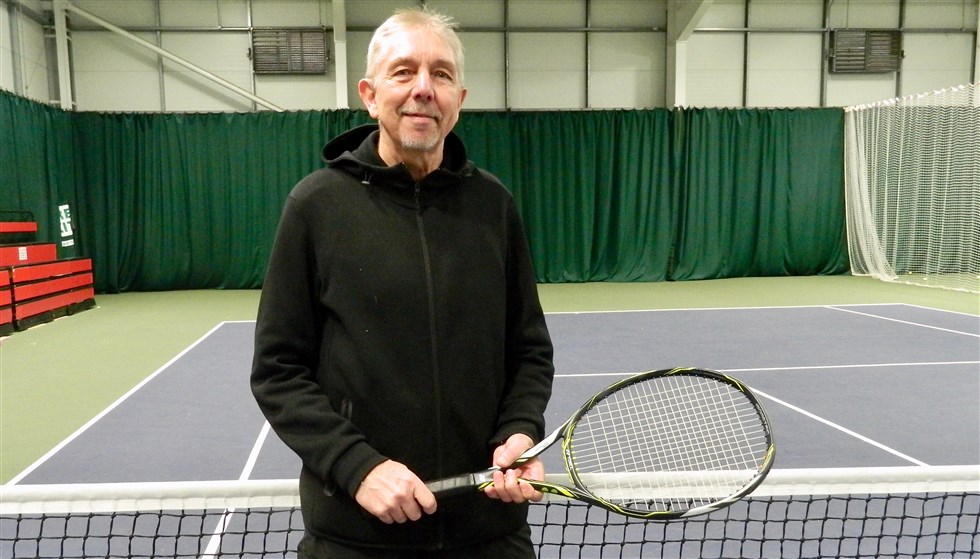